A real choice of Quality.

Gelato represents one of the most famous and successful Italian histories worldwide. The art of making gelato in Italy has been a family business for a long time. By the early 1950’s the industry introduced “walking ice cream”.

In the 1950s, however, the industry entered this sector decisively by introducing walking ice cream which would impose a new way of consuming the product and lead to important changes in society and in consumer choices.

Another 50 years had to pass for a new, revolutionary idea in this sector. In fact, in 2009 STICKHOUSE launched a project of artisanal gelato on a stick to be produced daily and with genuine ingredients in every ice cream parlor; and offer them to the consumer in an original and creative way. Also in this case the success was immediate (confirmed by numerous imitation attempts) with a rapid spread all over the world.

Thanks to the appreciation shown by our customers for both the quality of the products and their presentation, we have decided to expand our proposal with the addition of a new “concept” (SCOOP) that we believe is equally revolutionary and based on continuous freezing. The machines are positioned directly in the point of sale where the gelato is produced on sight; and taken to serve to the consumer, in a cone or cup, always as freshly made.

Water, milk, sugar, protein, and vegetable fibers are the main ingredients of our gelato; does not contain any artificial colouring or flavouring.

Stickhouse produces quality gelato with carefully selected ingredients and respecting the Italian artisanal tradition. Thanks to a constant research Stickhouse is able to propose original, 100% authentic tastes. For a real pleasure.

DESIGN and CREATIVITY MADE IN ITALY

At Stickhouse you can enjoy a UNIQUE creative experience! In fact, you can choose from the many flavors of gelato on a stick; or combine SCOOP proposals with each other. And personalize your gelato with delicious chocolate coatings, crunchy grains or other delicious decorations available.

Thanks to a simple production process, our gelato is made fresh every day according to the shop needs, offering our esteemed customers always the most exquisite and tasty products. 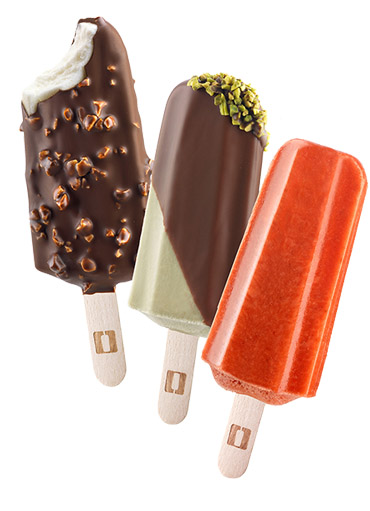